The 2012 Booketology Championship Is On!

Sorry about that. Honestly, we’re a little distracted.

Though we’re excited for our nearby collegiate athletes, their faculty, and their fans, we’ve got a much bigger game on our hands.

It’s time for the Booketology Championship Round!

Two books are going into the final matchup: Harper Lee’s To Kill a Mockingbird and Sir Arthur Conan Doyle’s The Adventures of Sherlock Holmes.

How did it come to such a dizzying duel?

Now it’s a cross-pond, cross-century book battle for the ages!

The game is afoot until midnight tonight. Tomorrow, Tuesday, April 3, at noon, we’ll announce which book our readers chose as the Booketology Champion, and we’ll also draw to see which lucky voter won the Booketology Elite 8 prize pack and the basketball signed by Whitney Terrell.

Thanks to all who participated in our first-ever Booketology tournament of books. No matter which book wins, we at the Kansas City Public Library are thrilled to have gotten such a great response, with so many people in the community talking about their love of literature. We’ll see you – and either Sherlock or Mockingbird – in the winners circle tomorrow.

May the best -- er... either of these great books win. 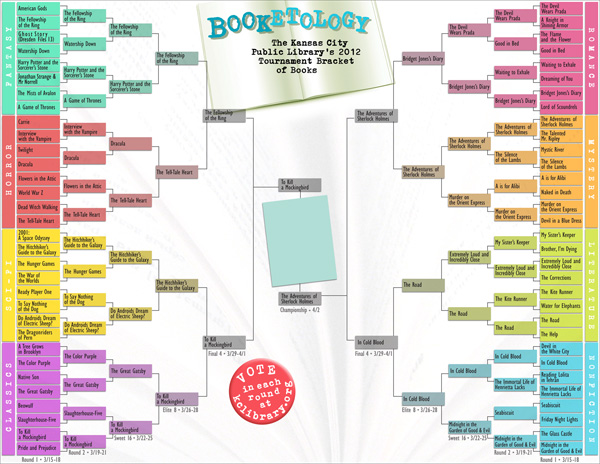