“I’m interested in art that speaks to the public, that takes on the political life of its moment,” says Justin Wolff, author of Thomas Hart Benton: A Life.

“The kind of art that one doesn’t have to have Ph.D in art history to talk about. I like art that speaks about people and for people.

“And when it comes to those ideas, there’s no better subject than Thomas Hart Benton.”

Wolff, an assistant professor of art history at the University of Maine, will discuss his new biography of Benton on Thursday, April 12, 2012 at 6:30 p.m. at the Central Library, 14 W. 10th.

A long-time Kansas City resident and champion of regionalist painting, Benton (1889-1975) was and remains a lightning rod for controversy, not only for his strikingly idiosyncratic murals and paintings but for his politics.

“Benton was someone people clearly have strong opinions about,” Wolff says. “Especially his art. But it’s been hard to get a sense of who the man was. Usually he’s presented as somebody you either love or hate.

“So I thought it was time for a re-evaluation – a long, serious, analytical look at his life and work. The last big book on Benton came out for his centennial in 1989.”

Painting in a representational style, Benton fell out of favor with proponents of modern art, including his former student Jackson Pollock. He could be confrontational, at one time declaring himself an enemy of modernism.

But his political thinking also came under attack, especially from leftists who found him conservative and old-fashioned.

Wolff finds that ironic, for Benton was basically a progressive, a champion of the common man. 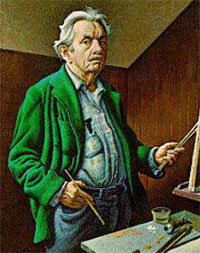 “Some of the reviews of my book have noted – much to my pleasure – that no matter how one feels about his art, Benton comes across as a wonderful example of how difficult it is to live a political attitude.

“Benton despised the fact that he was expected to fall into this or that political mode. Socially he had conservative views, politically he was liberal. Sometimes he felt radically about things, sometimes just the opposite.

“But he was besieged by critics who demanded that he explain his politics. He felt he was being asked to reduce himself to a caricature. So I think this partisan election season it’s nice to look at Benton and realize that one can live their politics in a sometimes paradoxical manner. That’s just the way the world is.”

“Benton was an incredible writer. Not just for what he writes, but the way he writes. He’s genuinely fun to read.”

In fact, Wolff says, he was hugely influenced by Benton’s smart but approachable literary style while writing the biography.

“What I didn’t understand when I took on this project and decided to go with a general publisher rather than with an academic press, was that I would find myself playing a Benton-esque role.

“I knew I wanted to write about him in such a way that anybody can pick up my book and enjoy it. It had to be well researched and smart, but totally readable. It couldn’t be just for other art historians.

“I really felt that Benton was my guide and kindred spirit, showing me how to work with complicated material while making it understandable.

“Benton showed me how to be smart and popular.”