Readers' Contest!
Write a personal ad for your favorite character from Victorian literature to win a copy of Jennifer's book and a box of Christopher Elbow chocolates!

Phegley’s book is part of the series Victorian Life and Times published by Praeger Press. Other volumes address such issues as sports, technology, health care and even shopping in Great Britain in the second half of the 19th century.

Initially, Phegley says, she was reluctant to take on the task.

“At first I was put off because it seemed so overdone a topic. So many critics have talked about marriage in the Victorian novel. But I slowly realized that nobody has approached the day-to-day ways in which marriage and courtship unfolded. I was looking for a real historical understanding of how women went about finding husbands.”

In the end, Phegley’s specialty – Victorian newspapers and magazines – provided some key insights.

“It seems to have started among the working classes in urban settings,” she says. “These ads were popular with displaced people who had just come to the city and didn’t have the traditional social circles in which to find mates. 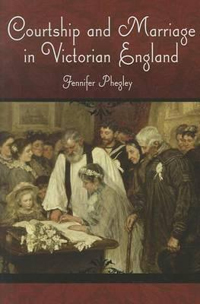 “In the ads they would describe their qualities and what they hoped to find in a spouse.

Because so many people started writing in, the editors began devoting entire sections of the paper or magazine to matrimonial ads.

“Some have speculated that at first these were not true matrimonial advertisements but were attempts by women to find a sugar daddy, to become a kept woman,” Phegley says. “This was probably because of the class of people advertising at the beginning.”

Within a few years, though, the practice had trickled up to the middle and upper classes.

These ads became so popular that within 20 years Victorians could turn to periodicals like the Matrimonial News that dealt exclusively with the search for a spouse.

Another rich source for Phegley’s research was the Victorian conduct book, which laid down the rules for courtship, writing love letters and other romantic pastimes.

“People today assume that these books expected women to be passive, to let men make the decisions and initiate the romance. And to follow their parents’ wishes.

“What I found was more emphasis on women taking charge, on guiding the process, on making smart decisions.”

Of course, in all this exchange of ideas, almost nobody was talking about sex.

“Sex is mentioned in only very veiled ways,” Phegley says. “One magazine had a feature called ‘Cupid’s Mail Bag’ in which women might ask questions which today seem very tame but back then were risqué.

“Even so, they were never specifically about sex. It was always something like, ‘I feel really guilty because I went out at night to walk with a man behind my parents’ backs…’”

Perhaps because most young Victorian women were sexually inexperienced, the honeymoon became a very important ritual.

“It was expected that you would run off alone together for this honeymoon trip,” Phegley says. “Of course, there was lots of anxiety. If you were a man you probably had gone to a prostitute” – at the time in London there was a prostitute for every dozen men – “but if you were a woman it was big mystery. You probably hoped an older friend or family member would clue you in.”

It was also during this period that our modern concept of romantic love was solidified, Phegley says.

“At the beginning of 19th century you see a shift from family-arranged marriages meant as economic compacts to the idea that individuals should make their own choices based on not just economic need, but on love.

“By the 1840s the prevailing ideal was that marriage must be based on mutual affection. And by the end of the century it was considered distasteful – even shameful – to marry someone you don’t actually love.”