Chaucer was inspired by Boccaccio, whose collection of tales, the Decameron, Chaucer had read – Chaucer had served in the king’s diplomatic corps and could read and speak several languages.  In the Decameron, set in a villa outside Florence, ten people come together to avoid the plague ravaging Florence. During their ten-day stay, each of the ten tells a story.

The hundred tales in Boccaccio’s book are often quite short (no more than a few pages in length).  Chaucer’s work, if he produced the work he promised, would have had more stories, and stories of greater length and complexity than Boccaccio attempted.

Some tales are quite long.  The “Knight’s Tale” is about 30 pages in length, while the “Parson’s Tale” (more a sermon on the seven deadly sins than a tale) is about 50 pages.

Each of the pilgrims has his/her own backstory, which, in some cases, explains the story told.  Some of the backstories are developed at length: the Wife of Bath tells her own life story in a prologue as long as her tale about the “loathly lady.” The Pardoner and the Canon’s tales further develop their own backstory, while the backstories of other pilgrims have to be gathered from occasional remarks they make or from the response of the host or other pilgrims to them.

For example, when the Reeve reacts violently to the Miller’s tale of a carpenter cuckolded, we learn that the Reeve is a carpenter who is known to the Miller. We also get a brief snapshot of the pilgrims in the “General Prologue” which describes the initial gathering at the Tabard Inn in London. 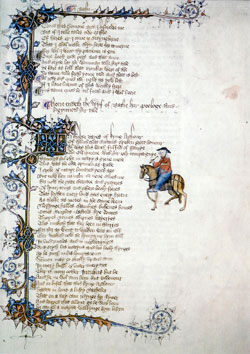 The poem’s arrangement is not entirely clear outside of the initial group that follows the General Prologue. The Knight tells the first tale, invited by the host, and is followed immediately by the drunken Miller, who feels the Knight’s moralistic tale of honor is a lot of drivel. When the Miller finishes his tale about a cuckolded carpenter, the Reeve (who is also a carpenter and married) angrily demands to answer with his own tale, about a dishonest miller who finds himself cheated and cuckolded twice over by a pair of university students.

Beyond this initial offering, the other tales have little indicators where they belong. Based on the rather animated framing of the first few tales, we can assume that Chaucer intended to join the tales together with such framing narratives, but that he had not got to that point when he stopped working on the Tales.

Chaucer’s method seems to have been to work on a tale here, a tale there, and to put together the final grouping at the end. This final framing would have included geographical details of places passed along the way.  Some of the tales we have (e.g. the “Cook’s Tale”) are incomplete, while others (e.g., the “Shipman’s Tale”) seem originally to have been written for a woman, though told here by a man.

We don’t know why Chaucer did not finish his work, but the evidence suggests that he stopped writing and shelved it –  rather than died while still working on it. Appended to most editions of the Canterbury Tales is something of a retraction, in which the author begs the reader’s pardon for his various frivolous entertainments, among which he includes The Canterbury Tales (which must have been circulating among the court and those connected with it as individual tales or groups of tales) and his Trojan romance, Troilus and Criseyde, while hoping for divine favor for his work on Boethius’ Consolation and other philosophical works.

What Chaucer has given, even in this fragmentary work, is a portrait of English Christendom as he knew it, and many have praised the breadth of Chaucer’s vision and his generosity.  From the drunken Miller to the greedy (and evil) Pardoner to the lusty Wife of Bath, Chaucer makes no judgment of his pilgrims.  All are pilgrims on the journey to Canterbury, and all are God’s children.  Though some may have noble motives for going to the shrine of Thomas a Becket (e.g. the Knight), and others may have more questionable motives (e.g. the Wife of Bath is looking for a new husband while the Pardoner is looking to drum up business selling pardons), all are bound together in one community, which seems to be how Chaucer saw the world.

Chaucer may have seen the Canterbury Tales as a foolish indulgence, a work which exists only in broken form, and yet it is rightly considered one of the masterworks of English literature. Chaucer’s poetic output was tremendously popular and it helped to ensure that the standard English of Great Britain would be that spoken in the area around London – not so sure a thing in Chaucer’s day.

You may want to tackle this in Middle English, but if you are looking for a good translation, I’d recommend that of Nevill Coghill, which captures the feel of Chaucer’s English in a modern idiom.

The only decent recording of the Tales I found was John Miles Foley’s wonderful reading of Burton Raffel’s translation. The only recording I found available of the work in Middle English used modern pronunciation of the words which gives us something strange, something neither medieval nor modern. Another translation is available as a  free e-book from Project Gutenberg.

Bernard Norcott-Mahany, a library technical assistant at the Lucile H. Bluford Branch, is our resident connoisseur of classic literature. He is also the leader of the Black Classics and In the Heat of the Night book groups.