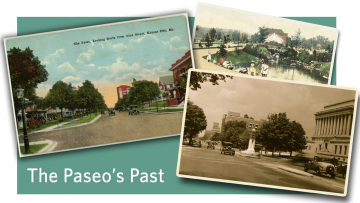 Wednesday, February 27, 2019 - 4:41pm
Street signs along Kansas City's Paseo Boulevard began coming down in late February, replaced with new ones proclaiming the street’s new name: Martin Luther King Jr. Boulevard. Following a long period of local debate, a mayoral task force, and a measure passed by the city council in October, the historic street is now officially renamed after the civil rights leader. On the occasion of the boulevard’s name change, the Library has pulled together a selection of images from the Missouri Valley Special Collections that provide some snapshots of The Paseo’s past.
Read more
African American Voices in Books and Film

Friday, February 8, 2019 - 2:20pm
From classic literature to contemporary cinema, the Library offers a number of ways to discover stories celebrating the African American experience. As we commemorate Black History Month, check out a selection of recommended books and browse the collection of documentaries and films available through the free Kanopy streaming service.
Read more
How Was the Non-River State Line That Divides KCK and KCMO Selected? Your KC Q Answered

A recent What’s Your KC Q? submission asked us to explain the odd, seemingly arbitrary state line between Kansas and Missouri as it passes through the West Bottoms. The asker describes himself as a geography nerd with an interest in maps who’s always wondered why the Missouri border doesn’t extend to the Kansas River. When you look at it, the line does seem strange. Just to the north, the state line begins following the more obvious Missouri River. Why not just push the line a few hundred yards west to make things nice and neat? Seems like a no-brainer.

Monday, January 28, 2019 - 1:11pm
Each year, the Library partners with the Local Investment Commission (LINC) and the Black Archives of Mid-America to produce a series of Black History Month materials celebrating the legacies and accomplishments of notable African-Americans from the Kansas City area. The individuals featured in the 2019 series all helped break down barriers in our community, elevating and inspiring others then and now. Read on to learn more about their achievements.
Read more
How did Arrowhead Stadium get its name? We answer a reader’s KC Q

The excitement at Arrowhead Stadium during the divisional playoff game against the Indianapolis Colts got Tom Solon to wondering how the stadium got its name. “I’ve always thought it was an awesome name for a stadium,” Solon writes to KCQ, a recurring feature in which The Kansas City Star, in partnership with the Kansas City Public Library, answers readers’ questions. Read on for the back story on the naming of the stadium.

The name River Quay (pronounced “key”) harkens back to the settlement of fur trader François Chouteau, who established a landing post in the 1820s near today’s River Market. Quay, a word of Old French origin meaning “loading platform” or “wharf,” was used to describe the natural rock ledge that served as a landing place for steamboats delivering cargo to the burgeoning towns of Westport and Independence.

Driving around Kansas City in late December this year, you’d be hard pressed to spot any snow, let alone a humongous snowman. Yet, if you could take a step back to the winter of 1964 you would see one towering high over Gillham Park. Frosty was designed that year by Vernon Jones, the Kansas City Parks Department’s then-supervisor. Each year, Frosty, Santa, toy soldiers and other displays visited the park just south of Gillham Road and 39th Street at Christmas time as part of Santa’s Wonderland.

Read more
Cultivating Your Craft Skills with Your Library Card

The Library is thinking of offering a new free service which provides more than 1,000 videos that teach you arts & crafts, design, cooking, painting, and more. We need you to test drive it, and all you need is your library card!

Question: How did “Union Station” get its name and why do so many other older railroad stations have that name?

It’s true that Kansas City’s Union Station doesn’t have a unique name. In fact, I found a similar question had been addressed by The Smithsonian Magazine in November 2017. The author explains that the term “union station” was used in the 19th and 20th centuries to indicate a hub in which multiple railroad companies operated. For example, you could enter a union station via a train on a small regional line and then switch to a larger national line to continue your journey. By today’s standards, it would be like changing airlines during a layover at an airport.

Read more
Will the KCTV5 tower ever light up the KC skyline again? We answer your KC Q

The KCTV broadcast tower at 31st Street and Grand Avenue once served as a 1,042-foot tall beacon at night, visible for miles around with more than 1,300 white lights tracing its four legs. But the tower has been unlit for more than a decade. Kansas City native Todd Hembree wonders why — and if — the lights will ever return.

The Library is currently migrating its large collection of digital historic images to a new software platform. An unfortunate consequence of our data migration is that we need to take the entire collection offline for about two months while the work is completed.

Question: What happened to the really cool looking city hall at 5th and Main?

Really cool looking is definitely an accurate description of Kansas City’s second City Hall building. To gain a better sense of what’s so cool about it, I began by consulting architectural historian George Ehrlich’s Kansas City, Missouri: An Architectural History, 1826-1990.

Read more
We Need Your Vote. Which Kansas City Question Do You Want Us to Answer Next?

This voting round is currently closed

Read more
Does Kansas City lack style when it comes to street signs? We answer your KC Q

Self-proclaimed grammar nerd Don Beggs of Brookside reached out to The Kansas City Star and the Kansas City Public Library “What’s Your KC Q?” team to ask about the city’s street signs.

The city seems to be lacking style, Beggs said. More specifically, it appears the city doesn’t follow a stylebook when it comes to abbreviating or capitalizing street labels.

Read more
What's Your KC Q? How Kansas City Got its Name

Monday, October 15, 2018 - 8:16am
It sure seems like Kansas City ought to be named Missouri City, doesn’t it? Although, our neighbors to the north in Clay County where the actual Missouri City is located might have something to say about that. To better understand why Kansas City was given its name, we must first gain an understanding of why a city was established here, and also what was going on in the world at that time.
Read more