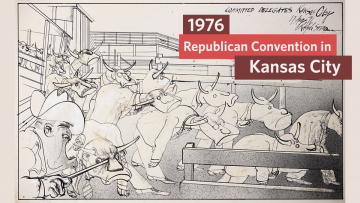 This week marks 43 years since Ralph Steadman visited a muggy Kansas City to cover the 1976 Republican National Convention for Rolling Stone magazine. Twelve of Steadman’s inimitable drawings ultimately were published alongside John Dean’s first-person story, “Rituals of the Herd.” Six of them - and six more Steadman illustrations from his time in Kansas City - are part of the traveling exhibit, Ralph Steadman: A Retrospective, on display at the Library’s Central Library through September 8, 2019.

In 2016, the Library marked the 40th anniversary of the ’76 Convention with a special exhibit, Republican Showdown in Kansas City,  which included several pieces from the Library’s Missouri Valley Special Collections. The MVSC houses a number of artifacts from the convention and, in conjunction with its 43rd anniversary and the Steadman retrospective, we thought we’d showcase a bit of both.